In honor of Halloween, we’re having another scary YAmondAY! My friend Tami Clayton is a YA and Middle Grade writer with a passion for travel, all things dark chocolate and coffee, and reading everything she can get her hands on. She’ll take us for a spooky ride : )

Last week, Elizabeth Fais shared three great spooky-fun YA reads. This week, I’m going to take things to a more eerie level with three creepy YA books. And what better time to curl up with a creeptastically good book than during the week of All Hallow’s Eve?

Occult and serial murders? Check. Creepy nursery rhymes that get stuck in your head like bad Halloween candy? Check. Intelligent, quirky heroines with supernatural gifts who get drawn into paranormal happenings? Check and check. These three spine-tingling books will certainly give you the shivers and have you double and triple checking you locked the door before going to bed.

The Diviners by Libba Bray

Set against a backdrop of 1926 New York City, we meet the heroine of the story — sassy, snarky, seventeen year-old Evie O’Neil — as she is sent from her home in Ohio to live with her Uncle Will who runs the Museum of American Folklore, Superstition & the Occult (or the “Museum of the Creepy Crawlies” as it’s localy known). When mysterious occult murders start happening in the city, Evie, her uncle, and their friends are determined to find the killer and stop him. Evie is called upon to use her supernatural gift as a Diviner to help solve the mystery.

In this rich, historical paranormal story (the first in a series) set during one of my favorite decades, it is obvious the author did a ton of research when writing this novel as seen by the incredible amount period details she expertly mixes in without bogging down the story. Libba masterfully weaves the elaborate, rich backstories of Evie and her friends into a spooky story sure to keep you turning the pages well into the night. I’d recommend keeping the light on when it’s time for bed, though. The supremely creepy song the killer sings throughout the story will stick with you long after you’ve closed the book. And you’ll probably never look at an apron the same way again.

The Name of the Star by Maureen Johnson

Only Maureen Johnson can take a topic like Jack the Ripper and wrap it around witty dialogue and characters to make an eerily entertaining, page-turner of a novel. Set in modern day London, Maureen’s first paranormal thriller stars teenager Rory Deveaux who has recently moved with her family from her native southern Louisiana to London. There she enrolls in a boarding school just as a series of grisly murders begin, killings that seem to be the work of a copy cat killer mimicking Jack the Ripper. Even though the “eyes of London” (video surveillance cameras) are poised to capture the goings-on in the city, the killer goes undetected and unseen on the videos.

Ripper-mania grips the city as well as Rory’s campus while the police have few leads and no witnesses. That is, until Rory sees a mysterious man on campus, a man she comes to find out only she can see. She soon realizes she is about to become his next victim unless she can find a way to stop him. Meticulously researched details, intelligent characters, and a setting in one of my favorite cities makes for a chillingly good read. (The second book in the series is coming in 2013.)

The Raven Boys by Maggie Stiefvater

Blue Sargent always accompanies her mother, the town psychic in Henrietta, Virginia, to the graveyard on St. Mark’s Eve to watch the soon-to-be dead march past. Blue herself cannot see them, that is, until that one St. Mark’s eve when she sees a boy come out of the darkness and hears him speak his name to her: Gansey. This is highly unusual for Blue, who has been told since she was a little girl by her mother and her psychic friends that she will kill her true love with a kiss. She never considered this to be a problem until she meets the mysterious boy from the graveyard in person, a boy she knows will die within the next twelve months, a boy she can’t help but wonder will die because of her.

Gansey and his friends – students at the nearby, prestigious Aglionby Academy, whom Blue refers to as The Raven Boys – have been searching for Glendower, a deceased Welsh king believed to bestow great power upon the one who disinters his secretively hidden body. Blue has always made a point of not ssociating with the wealthy, privileged Raven Boys, but after meeting Gansey and his friends, she is drawn into their search. Dark magic, paranormal activity, and sinister forces try to keep them from pursuing their quest in which nothing is as it seems.

Written with beautifully haunting prose, The Raven Boys (the first book in a new series by the author) effortlessly blends mystery, paranormal elements, easily relatable characters, and a setting that comes to life as though it were another character in the story.

So, instead of overindulging on candy this Halloween, grab one of these creepy reads along with your blanket, a warm beverage, and maybe a reading buddy who can reality check you after say for the fifth time, “Did you hear that?”

But then again, maybe not.

But wait! There’s more! I recently had the good fortune to hear Libba Bray speak at Powell’s Bookstore and snagged an autographed copy of The Diviners to give away to one lucky commenter.

To be entered for a chance to win, just leave a comment below by midnight PST, November 4th. If you leave a comment on my blog as well (by clicking here), your name will be entered twice. Easy peasy. (The giveaway is limited to residents of the US and Canada due to shipping costs.)

Thank you, Fabio, for having me here today! 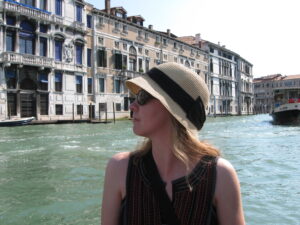 Tami Clayton is a YA and Middle Grade writer with a passion for travel. When she’s not busy being a child/family therapist or scheming her next adventure abroad, she’s hard at work on her first contemporary YA fiction novel.